I played around with CV mode and motor acceleration on my AVID this week to find the sweet spot between low vibration on my laser head and gcode execution time.

I think you are trying to put a square peg in a round hole.

Get some 10 series 8020 and make it as big as you want and really take advantage of that low mass LED head. AvidCNC’s gantry just has way too much mass.

Some stats for that machine;

On the machine best suited for a laser, I agree, an AVID machine is big and heavy which makes it a bit slower for some laser work - although for raster work you can easily raster at 1100ipm on an AVID if you laser is up to it. In most applications you won’t be rastering at more than 200ipm because you just can’t get enough heat for a good image, and lasering is a thermal process that usually takes a couple milliseconds to generate a pixel. On the other hand, the AVID has a great controller in it for diode lasers. I can write good quality lettering 0.010" high or less (that is laser spot size limited), can cover a very large XY area, and has a Z stage for focusing and following 3D contours.

For most people CNC machines aren’t like golf clubs where you can have a special one for each task. I started with mine as a router for woodworking, and added a laser later because they have a lot of uses, and I like to combine the router and laser work on the same project files in Vectric. I have no room in my shop, or desire to support a second machine.

As for the Atomstack…
There are 3 tiers of diode laser heads. All of the chinese stuff is on the bottom (Atomstack), then Jtec and Endurance, and then Opt is on top all by themselves.

If you don’t mind the diodes staring to significantly deteriorate soon (I have heard of many of them completely failing in less than 100 hours of full power use), or crappy optics, the chinese ones (like the Atomstack) are fine. They are great ones to start out with to see if its something you want to do as a hobby or business before getting a good one.
However, if you are doing commercial work, and want good resolution they aren’t so good. The other problem with the chinese laser CNC portion is that they don’t have a Z axis (other than a manual screw) usually, so you spend most of your life trying to get a good focus. You really need to have a real Z stage on the machine if you are going to be productive at all.

If you look at Atomstack’s advertising, you should be suspicious right away. They market the input power most of the time (just now starting to spec the optical output power), they use Paulownia wood for their cutting metrics (which is just next do balsa for density), and most of the time forget to mention that it takes 10-20 passes to cut through anything else (or what the feedrate is). The dot size in their spec is theoretically good enough for 256dpi, but I’m sure that spec is stretched a bit. There is a lot of game to specing the dot size.

I"ve used both kinds (never had the middle tier ones) and IMO the AVID with a good laser on it is a far superior machine and would be much more productive as far as setup time, image quality, and reliability.

All of the chinese stuff is on the bottom (Atomstack)

Let’s try it from another angle since that didn’t work;

The first time I talked to AvidCNC was back in 2010 when they were CNC Router Parts. They actually sent me to their competitor because their machine wouldn’t have worked for my use case. I have always been impressed with their candor and honest responses about their products.

So wouldn’t you think that since they have all these years building these machines that they would have noticed the vibration yet? And maybe they would have set up their machine and tuned the software to give the best results? 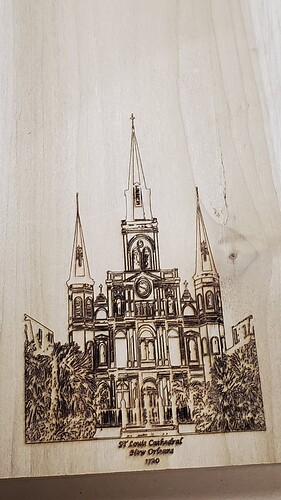 And you don’t touch max accel or anything like that. I like your work. Its all very detailed and great topics

true that, still stock settings, today I did update mach4 and ess to latest. I’ll report back if any issues

Yes, I’m sure they noticed vibration in some cases (otherwise they’d have set accel to 100). However, the acceleration setting is just like feedrate, a compramise between speed and quality. It has a lot to do with the machine design, but it is also application dependent. AVID cannot magically pick the best value for everyone because there is no one perfect value.

They did pick a good middle of the road value that is probably fine for most applications and customers. It is too low for some laser rastering applications, and too high for some others. That application has only just come along for AVID because the ESS has only supported rastering for about a year. It is probably perfect for a light and stiff benchtop pro, and fine for metal and plasma head work because of the low feed rate. It is too high for Vcarving on the bigger machines if you are looking for a good clean edge on hardwood, but if you are making plywood signs its fine.

Mach 4 (like every other robotics control software I’ve seen in the last 20 years) has programmable acceleration because if you don’t have that, your only other choice to remove unwanted vibration is to redesign the system mechanically.

So no, the AVID machine is not perfect for all situations, and they don’t try to sell them into applications where they are way off, but there are many that are perfectly fine that with a little tuning can be even better. The acceleration setting is there to improve performance, so why not use it?

Hi Brian,
This is a perfect example of what I’m talking about. This image has dozens of damped oscilation traces in it. I have circled a few below. Your machine behaves exactly like mine. In busy image like this, you don’t notice it as much, but if you were trying to raster a photograph, or doing something with a lot of parallel lines in the X axis it wouldn’t be good.

I’m not trying to poo poo anyone’s work or judgement of quality in this thread. If its good enough for them, then it is absolutely good enough. I’m only trying to provide information and options for those who want to make it a little better, thats all. 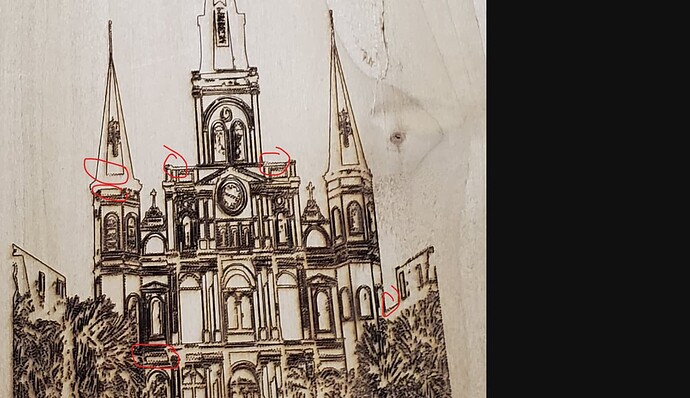 @jjneeb I love you, man. But you are chasing mechanical properties of a machine doing something it was never intended to do, using software that is next to being utter and complete trash.

Replace the ESS and Mach 4 should be your next step. You have reached the end of the tools you have.

We can agree to disagree, so no worries, its all good

I understand completely, I know if I run it 10 ipm it would take forever and at 100 ipm the customer was 100% happy with it.

EIDT: Never mind. I think this topic is dead. Happy Holidays and all…