I’m considering swapping out the 8" for 12" Z Axis on a Pro with 8" gantry clearance for sculpting HDPE elements positioned on a vertical table fixture. I was hoping for feedback from anyone who owns a machine with a 12" Z Axis to reflect on relative performance. Thanks in advance for your time.

Hey. I have a 12 inch Z on my machine. Not really sure what I can tell you. I have never cut up above the gantry height, my projects have always been under 8 inches so far. I have done a wood beam. But had to cut it down to fit under the gantry.

Some considerations would be what you are cutting. The farther from the gantry you are the more leverage there will be to “twist” the Z out of square. But milling wood should never be an issue with proper speeds and feeds.

If you are in a garage like me. Be careful where the machine homes. I have wiped out my garage door opener homing the machine. Had to adjust the drag chain to not be so tall.

If you have some specific questions. Shoot them at me.

That’s kind of you, Nick. I’ll be cutting HDPE plastic below the table, and anticipate occasionally appreciating the 12" reach. I plan to slice monumental sculptures into “bricks”, the course height being limited by the thickness of stock that will fit under the gantry and surfacing tool, then one face relief cut. For deep relief cutting that can’t be confronted by flipping the part on the table top, the part will be transferred to a manual indexing fixture below the head of the table. HDPE enjoys big bites at relatively high feed rates- fast, high volume chip ejection limits heating, preventing melt.

The 12" travel is more for the foam guys and their 8" and 10" end mills. I have them because I do cut foam for composite aircraft. I really wouldn’t see any other use for such long end mill so the extra length in the Z axis might just cause more vibration and rigidity issues when cutting HDPE.

NOTE: If you are getting dual Z axis (actually the other would be a “U” axis) I would advise you to get them both the same size. Mach4 has a terrible time when they are different. The soft limits will not translate and you will be hitting the hard stops.

I might be misunderstanding here. I’m definitely not claiming to be an expert with Mach.

I have an AVIDcnc machine with the dual Z axis and it came configured from them differently than the way I was interpreting the post above. Instead of dealing with a ‘U’ axis, AVID just sends two profiles along with the machine. When Mach is launched with one profile X,Y, & Z are the X, Y and the first Z. When I launch Mach with the 2’nd profile it runs with X, Y and the second Z. That just makes it easier on the ancient CAD system I use and its post-processor.

Later I went in and manually edited one profileto add the rotary axis as the ‘A’ axis and in the other profile I set up the ‘A’ axis as the alternate ‘Z’, just so I can jog it out of the way with my pendant if I didn’t have it all the way up when launching.

Using the profile feature in Mach is kind of a slick way to navigate having multiple setups for the same machine and one can map inputs, set all the values / configuration options differently, between them. Not sure if I am wording this well , or if my grammar is failing me here…

When Mach is launched with one profile X,Y, & Z are the X, Y and the first Z.

Interesting, I have one profile but a switch in a tab that flips between the plasma, spindle but also a plasma + rotary and spindle + rotary.

I see in the main DRO 4 axis. Now the Z axis switches between the two depending on plasma and spindle but the other is always listed as U.

Is this a recent install? I haven’t updated to the August release, waiting for everyone else to blow their machines up.

I bought the machine when they were still CNC-Router parts before rebranding to AVIDcnc right at the end of 2018. I downloaded and installed Mach somewhere right in there. I’ve not upgraded it since. The profiles I am using for the machine, I downloaded from their web-site. While getting things running, they sent me a replacement profile for one small issue I was having (early 2019), but other than that, it is unchanged.

I just went back and loaded a “screen snapshot since I’m not down in the garage”. It is labled on the screen as the “4” axis. I just assumed that was “A” because I reference it on the pendant as “A” and also in the G-Code.

I haven’t tried to customize to use different tabs and switch between, I’m just using the profiles they provided.

The thing that caused me to add my 0.02$ worth was that between the various profiles, I am able to set different sets of soft limits. 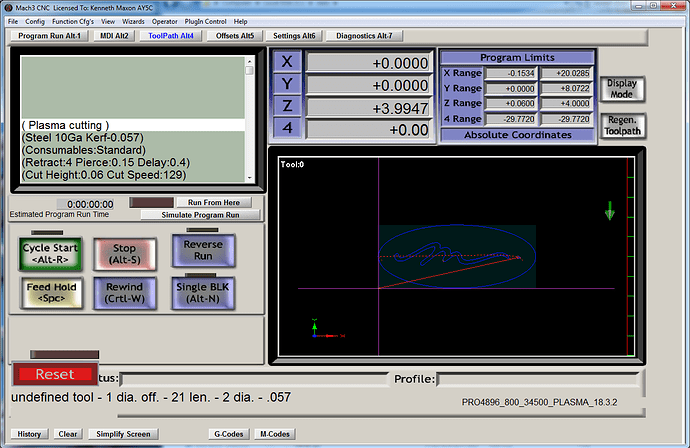 Ah, yeah, Mach3 - that explains it. Mach4 allows for on-the-fly switching but if it ain’t broke…

Yep, I am Mach4 as @davidcnc pointed out. Whole other beast.

My machine is an 8" gantry height/12" Z travel as you described. I originally went that route with future plans fro a 4th axis recessed in the table, which is where that setup shines, I think. Very similar to what I think your intended use would be in that your part is recessed. I CAN tell you I have had no problems with stiffness or rigidity in the gantry with this setup when working on top of the table. I think if you opted for a 12" high gantry WITH the 12"z-axis travel, you might notice a change that forces you to baby things a bit more than you have in the past.