Anyone swapping back and forth between router and plasma?

I’m getting into the plasma fun and built my first 2x2 Langmuir clone. It’s clearly not big enough and my 4x8 machine is staring at me from across the shop with an evil grin.

Does anyone regularly swap between using router and plasma? Obviously you’ve got the water pan that you’d need to fill/drain while switching but if you get that running through a pump I could see this working. Now that I’m typing this out, I guess you’d need to clear the debris/junk after cutting and put the pan somewhere. Hmm

Idk, I guess I’m trying to justify not wanting to spend another 10-15k on another machine.

Link to Adam Savages channel when his team did this

I have the set up Wide gantry and controls but haven’t built the router side yet.

You could fab up a torch holder to go next to your spindle. On a 4x8 without an extended gantry you wouldn’t be able to reach the full 4 feet though if you had a torch off to the side. If that didn’t matter to you than it would work.

Another option you have would be to extend your 4x8 and have a water table at one end.

No matter what you do you’re going to have to contend with wood being right next to sparks and water. They are plenty of people that do it, you just have to keep everything safe.

I just made a custom 3’ x 4’ water pan to sit on top of my spoil board. Used the router to machine some aluminum brackets to attach my Hypertherm 45XP Hand Torch directly under and concentric to the Spindle. Did my first cut today! Next step is to wire up a relay to trigger the torch via g code commands.
This is one step closer to completing my all-in-one triple threat build

I have the PRO60120 with extended gantry and U axis.

My water table is 4’ x 8’. It’s stored under the machine on the cross members between the legs.

I use a 2 ton engine crane to move the water table. I can do it by myself, nobody else needed.

It takes a lot of time to remove the spoilboard and to put it back on. In fact, I have considered just cutting a hole in the spoilboard for the drain because without it, the ringing is considerable. Even if you bolt down the water table using the brackets.

I would get the same sized U axis as the Z axis. The script swaps the two axis when you switch over to plasma but Mach4 isn’t smart enough to to swap the soft limits and it causes problems.

Personally, every AvidCNC machine shipped should have the extended gantry and two axis. The dual process capability is priceless.

Another thing I would do is get a USB RS485 for your computer and the interface for your Hypertherm machine. It’s easy to add the ModBus control for current and if you have the time, the status codes and errors are also pretty cool. That gives you access to those features from within Mach4.

If you have the RS485 then you can try to add the Hypertherm “True Hole” function yourself. Jim Colt has explained it in many videos and online forums. For 2 years now that has been a project but I keep getting distracted with that dern tool carousel. True Hole is really needed so it’s a “sooner than later” thing.

Which by the way if you have ATC, the carousel is required to keep the tools out of the way while you drop that water table in the machine. Static tool posts get in the way. So it was this fact that started the fully retracting carousel project.

Google “Jim Colt True Hole” for more info on this…

EXTRA: Also, be advised that adding the U axis and the THC will eat the last of your ports on the ESS. After you install it, throw away the key to your case because you will have no room left in it. The capacitor for the extra axis will eat the space as well so keep that in mind.

I have a machine from AVIDCNC set up for both router and plasma operation. 1/2 and 1/2 of a 4x8 table. The biggest challenge I have found is keeping swarf from the router side out of the plasma tank. I built a set of UHMWPE Seperators. If I ever crash they’ll just flex out of the way. Used both the plasma cutter and the router to make these and powder coated the steel. 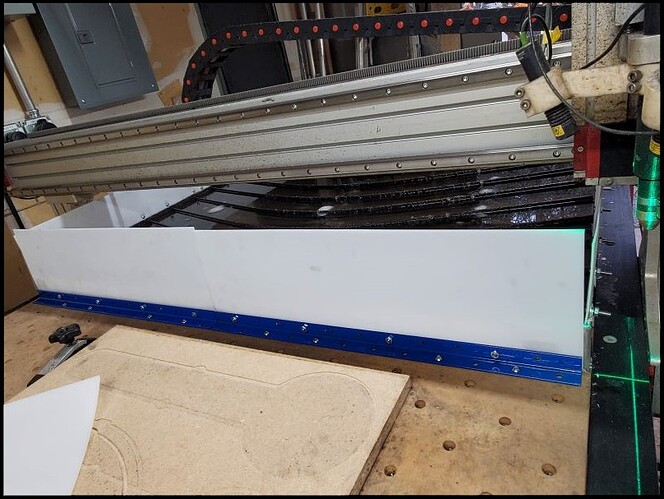 The photo above was from the initial install where I was trying to keep the water from the plasma tank from splashing all over the place. I went back and made an extra set to go around the router table as well as they keep the swarf well contained.

The second photo below shows machining through some wood and epoxy inlay without the ends installed. They were installed shortly after this photo. 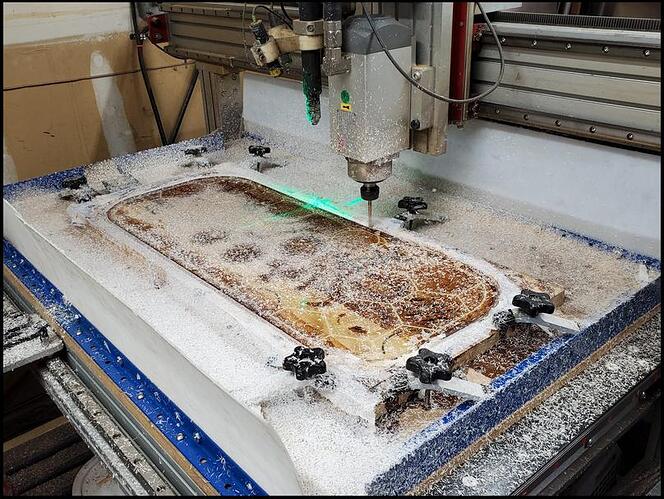