I’m in the process of upgrading my machine with a ATC spindle and controller. Took off the spoil board to check the frame, gantry etc. and decided to torque the bolts. What I found was that hand tightening the bolts was not even close to what the torque spec’s are. If anyone has a torque wrench you may want to at the very least check all the bolts on the gantry, may help with accuracy and possibly making the machine a little more rigid.

What did you Torque to? Assume different connection types have different specs. Let us know how the ATC works out.

For me I cranked them down “pretty tight” with my well calibrated “torque arm” (aka my right arm) and mine has been fine.

There’s only so much you can get out of a 6mm ball end mill before you start stripping things.

We don’t call out a specific torque rating in the build guide because most people do what I did above. Some folks like to put some blue LocTite on things as they go. I did that just because I had a bunch of tubes and thought “why not”

Not calling out a torque and relying on users to get things tight has worked out well. I know @MarkLindsayCNC delved into this a little on his build and I think even got a recommendation from 8020 on torque?

I was a little hesitant, especially the fasteners into aluminum. The fasteners have the grade stamped on the heads, so I looked up the torque specs for that grade bolt and had no issue’s with the exception of one bolt, didn’t feel right. Most of the bolts that I torqued were on the gantry riser and riser plate which use the t-nuts.

There were only two bolts that I had access to, that attached the z-axis gantry plate too the gantry R&P plate both are aluminum , no problem.

I got a least a quarter turn more on each bolt, some maybe a half .

I guess if someone decides to use a torque wrench , they should take it easy and if it doesn’t feel right then stop. Hand tightening is probably just fine, just wanted to see if torqueing the bolts would work

I did some looking on 8020’s website and had an online chat with one of their tech reps. We came up with 20 ft lb for the socket head cap screws that go into the t-nuts in the extrusion channel. For the steel bolts going into aluminum (i.e. mounting the Z axis on the Z axis plate,) I looked up the torque for steel bolts going into aluminum threads and settled on 120 in lb. When I went back and tightened the frame assembly bolts, quite a few of them were loose - or at least not up to 20 ft lb. Tightening them to 20 ft lb has stiffened up the whole machine dramatically.

NOTE: These torque values ARE NOT suggested, recommended, or endorsed by Avid CNC or any of their representatives. I did some research on my own, and came up with these values for MY machine. Use them at your own risk.

Because these are metric bolts I used Nm from the torque specs. A M8 socket head bolt with a 10.9 rating has a suggested torque of 22Nm, which is equivalent to 16 ft-lb, this is what I used.
After reading your post I did a search for metric socket head torque specs and found that there wasn’t any common spec’s they were all over the place

Just out of curiosity, why doesn’t Avid provide torque spec’s for the bolts? The reason I bring this up is because there are people who use hand tools occasionally and those who use them regularly, who acquire a feel for when a fastener is tight and even then will sometimes strip out a bolt. Providing torque specs for the fasteners used on their machines would not only take the guess work out of it , but also make the machine more rigid, which is what both Mark & I discovered.

To elaborate on that we try and make our machines as easy to assemble with the minimum amount of specialized tools. “Tight enough” has worked for what probably amounts to millions of fasteners that we have send out to customers.

I’m just making a suggestion that would take the guess work out of what’s tight enough. Using lock tite does nothing in regards as to how tight a fastener is, it just helps prevent it from coming loose.

Anyone purchasing a Avid machine could probably invest another $30 or so for a torque wrench.

I understand that you are trying to make the assembly process as simple as possible and the machines have worked just fine over the years, but why not provide the spec’s and give people the option to use them or not?

I hope I didn’t come across as rude… really what I was trying to articulate was the reasons we include, or don’t include something in our instructions. There are thousands of edge cases given that our machines can be assembled in so many configurations.

If we documented every single edge case our instructions would be thicker than the McMaster card catalog!

We do have to pick and choose what is included and what we leave out at times.

As far as I know fastener tightness hasn’t warranted us publishing a spec. However I will check as we are in the middle of a big update to some of our docs.

Also even if the stats don’t bear out including an extra step or a spec if it makes our users feel better that means it’s worth considering as well.

I’ll make sure I bring this up to our CX and documentation folks.

You didn’t come across as rude

I understand that there is a balance and deciding what to include in your manuals, I’m sure it’s not easy.
What’s considered tight enough to you and someone else can vary quite a bit. Providing spec’s ,I think would help a lot.

I think another consideration for providing the spec’s, would be for people that use your machines for their business, to be confident that once assembled using the spec’s, that the machine will be tight and have no worries about anything becoming loose.

I also had issues with the tightness of the bolts. For fear of over tightening I did not get about 2/3 of the bolts tight enough. I am mechanically inclined but do not do enough with aluminum to “feel” my way around. I looked for torque specs and found none when I assembled mine. After struggling with many issues I finally found Marks post that he used 120 in lbs. and 20 ft lbs. and while waiting for a fan replacement I re checked the machine and found that loose fasteners was likely my issues. The ability to at least search for specs would have saved me a few months of frustration. Especially when tramming. You can change it a couple thou by torquing differently.

Also I feel more info on doubling up the spoil board would be better. Possibly my issues are 60” specific but I will never know for sure.

I really have no defense for not researching torque specs before I started assembling my Avid 4848 Pro. I know to do that, especially as a former aircraft mechanic - we didn’t even approach the aircraft without the torque specs and a torque wrench. About all I can say is I was afraid of overtightening and shearing off bolts - something an online buddy of mine did on his 4896 Pro. In my effort to avoid that, I didn’t get them tight enough. That’s totally my fault.

I think I really did Avid a disservice by posting that video that shows the machine shaking before doing that research. For that, I sincerely apologize. I know that you can’t un-ring a bell, but I will do my best to update folks on the rigidity of the machine if you actually tighten the bolts.

especially as a former aircraft mechanic

I did ask for torque requirements and I got @Eric 's response from the factory. I was so horrified I sat for like two days not knowing how to proceed.

I did resolve the issue by learning 8020 though. The channel in the extrusion and the alloy of aluminum used is designed specifically to flex on assembly to create a locking action without the need for Loctite.

If you try to use a torque wrench you will deform those little ears and eventually flatten them and lose the spring-back that keeps the screw from moving with vibration.

So the proper response to the question is “hand tight.” I would avoid using the ratchet wrenches and use these tools instead;

The definition that you linked to, of hand tight is subjective, in that, no one person has the strength as another. If I had my wife hand tighten a bolt. I can guaranty that I’d be able to tighten it even more. I don’t what it would involve to figure out what the torque spec’s for the fasteners should be. Given the info you provide , I’m sure that 80/20 could come up with some spec’s.

As I mentioned this is just something I did out of curiosity.

no one person has the strength as another. If I had my wife hand tighten a bolt.

Correct. So you do it to YOUR hand tight, not somebody else’s “strength.”

Another way of saying it it is “tight but specifically NOT aided or mechanically advantaged tight.”

So don’t use a torque wrench or a ratchet wrench, use a hand tool and you are good.

Given the info you provide , I’m sure that 80/20 could come up with some spec’s.

That IS 8020’s specs. Watch their assembly guides. That is where I learned it.

AND! Hand tight, finger tight and mechanically advantaged or torqued are terms from military and aircraft specifications.

Here is the handle on the wrenches they sell, give you and idea of how tight it will be; 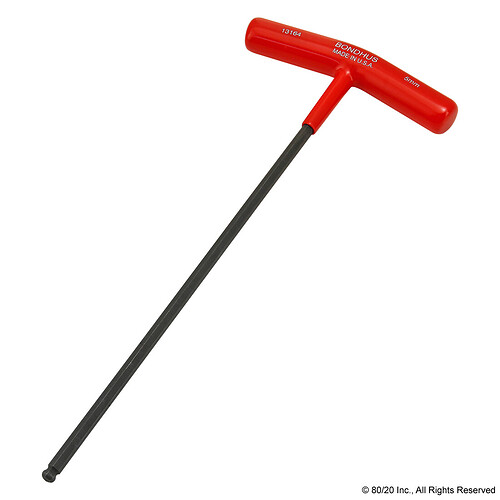 Snug and tight are the words used. No power tools required

Have the exact same set of T -handles, imperial/metric

So, if the hand tight method isn’t good enough. Break out the dead blow hammer

I used German spec…goodntight…but not I will have to go back and check against what others have researched.