Over in an ‘Everything Lasers’ thread, Jim (jjneeb) had asked a general question about plasma marking. It seemed more fitting to answer it in the Plasma threads of this forum.

There is not a huge amount of information about plasma-marking on the internet for the hobbyist, but it is definitely something that can easily be done in the home-shop with an AVIDCNC.

The Hypertherm manual has “air gas marking charts” however when I was experimenting, the quality was quite poor, the material warped badly (to an extreme) and the over-all usability of the finished part was a ‘non-starter’. Welding / heavier fabrication take place out in the garage from time to time, so I have a bottle of plain old Argon welding gas on hand. That was the ticket!

Along with the Argon gas bottles when connecting them to the Hypertherm power head one needs to use a pressure regulator instead of a typical TIG/MIG welding ‘flow’ regulator. The regulator, below, I purchased through AirGas, although I’m sure there are many out there on the market. (Model number: GP250-500-580) The important part about it was finding one that had the right output regulation range for this particular gas. I find that I do enough plasma marking that it was worth picking up an extra gas bottle rather than swapping the regulators back/forth. 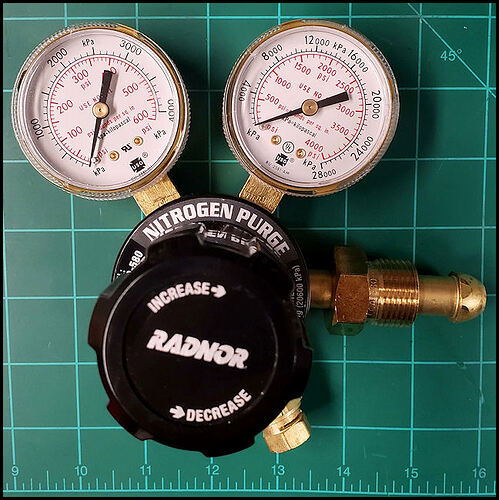 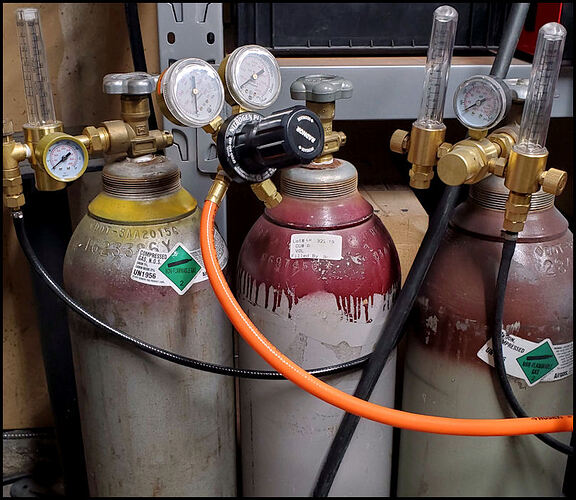 The other piece to know is that plasma marking uses different consumables that standard plasma cutting. It is not fully a matter of turning down the power. One uses the same electrode, torch adapter, and swirlring, however the nozzle and shield are swapped out. (below, left to right, Fine Cut, Marking, Normal Cut consumables) 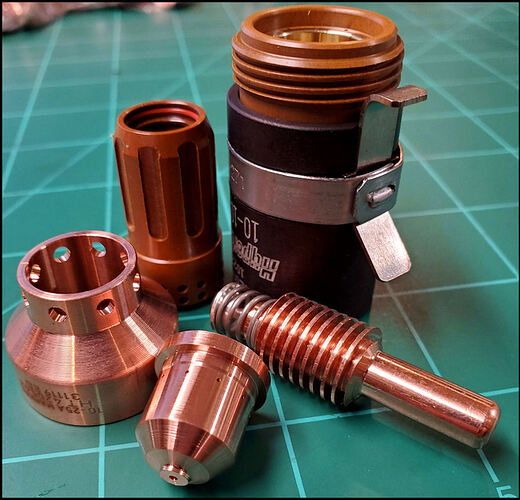 The cut chart, below, says the marking is <0.001 in mild steel. I have not been able to achieve that. At recommended speeds I consistently come out with a 0.003 score in the material and if I reduce speed, from the recomended, by 15% it is pretty easy to hit 0.005. For my applications that little bit of depth is better, so I have not invested the time to go back and understand why the cuts I am getting are deeper than the cut charts suggest they should be. 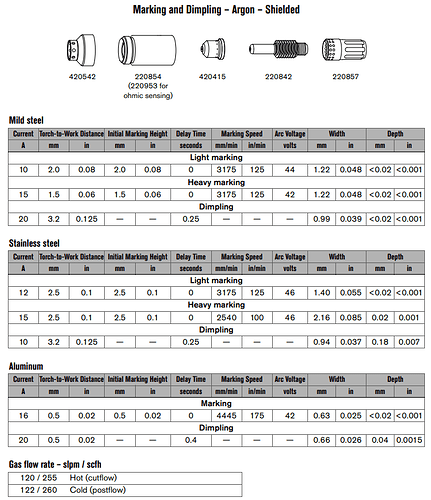 This is how it looks while it is cutting. Much, … MUCH less violent than traditional plasma cutting. 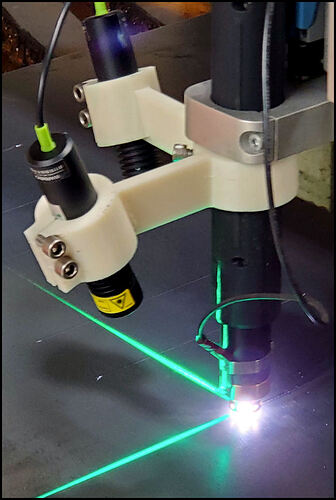 Here the machine is putting in some score lines for lining the parts up later on a box-break. You can see the divot left at the start/stop. Start divots are smaller than stop divots. The arc just doesn’t shut down fast enough. (Probably an interaction with Mach, the ESS, the signaling to the Hypertherm power unit and physically breaking the arc, but that is just a guess on my part.) 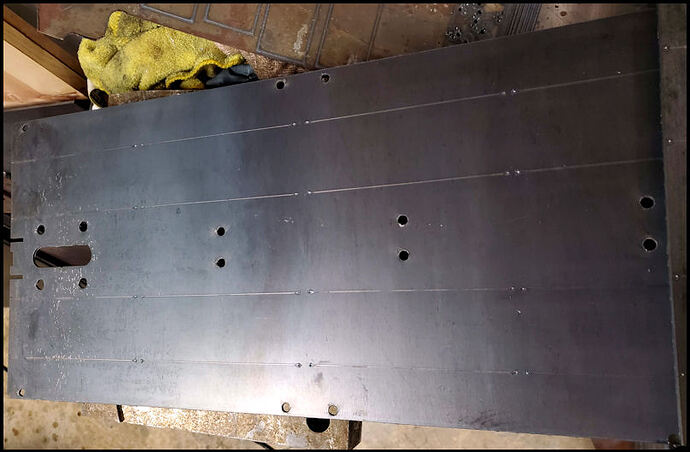 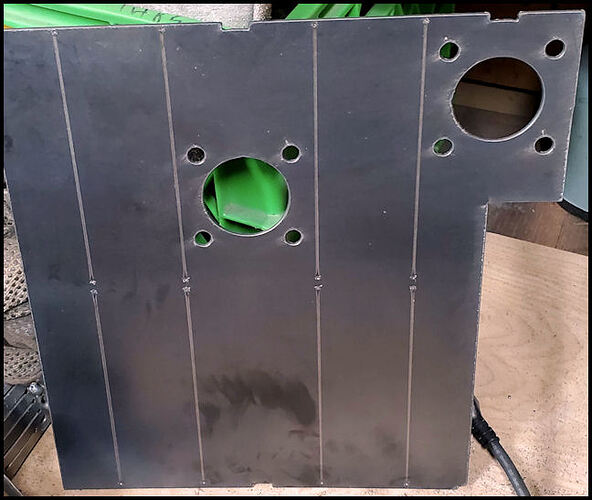 I use a simple home-brew python script to post-process standard Fanuc style G-Code from a legacy CAD system to a version of G-Code that is ‘plasma aware’. In support of reducing the exit divots, I played around with removing the recommended dwell and instead inserting an extra line of G-Code to immediately start lifting the ‘Z’ axis when the arc is commanded off. (Hypertherm recommends using the dwell so that the arc does not wander while lifting up or leave an unexpected scar across the material if the machine is not lifting high enough between moves.) Somewhere in Mach/ESS processing there seems to be a default delay built in and the machine seems to dwell there. I have not taken the time to get to the bottom of it. 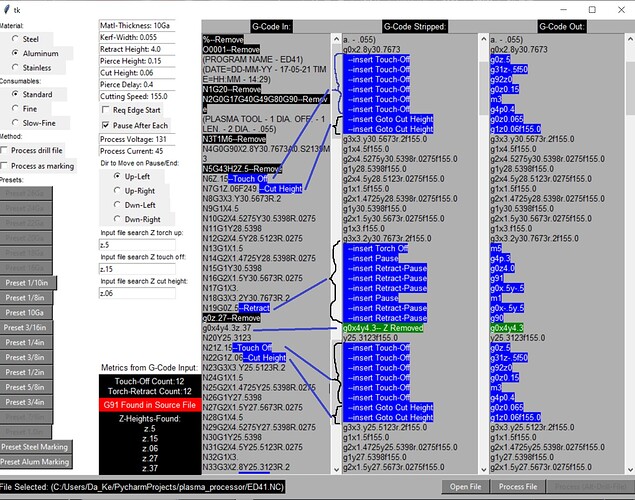 I couldn’t find any good photos with text, but you can see a little bit on that part in the back-left if you zoom in on it. It is great when making weldment pieces for your neighbors to put a big “left” on one part and “right” on the other when they are going weld them up later. Or mark a hole as “5/16-24” so that years later you don’t forget and try to jam in a 5/16-18. Of course, serial numbers and even decorative part marking are possible… 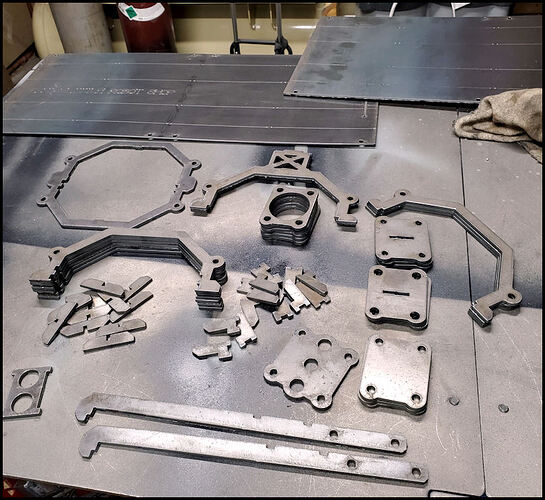 Below, a design I put on some end/cover plates. (The first 2 had issues with the cell phone camera so are a little blurry) 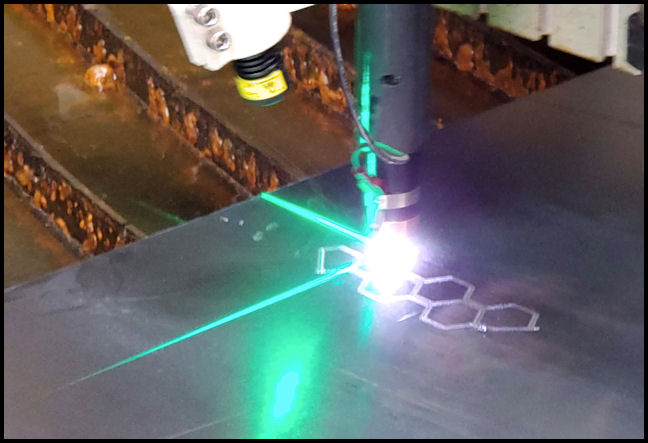 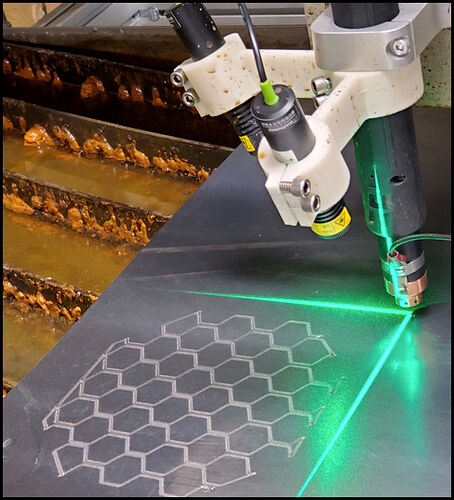 Hopefully this link will work for people. This is a short video snippet of plasma marking in-action:
https://drive.google.com/file/d/1QGF9f-PK7GwmMaT6O-OjOTi5BFn_q1hs/view?usp=share_link
Running the plasma table never gets old for me.

The image below shows this part fresh off the plasma table. 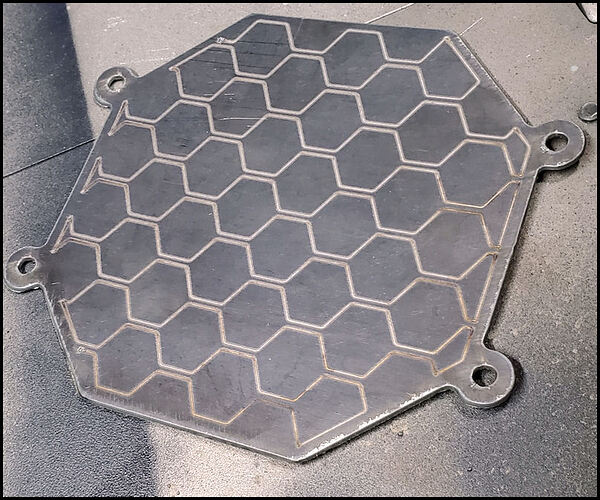 One can powder coat right over this and the patterning just makes the part ‘pop’. I’ve done this a few times on different pieces, but I don’t currently have any pictures after powder coating that are high enough quality to show off that aspect.

This is nowhere near as fine as what one could do with a fiber-laser, but if plasma is “what you have” then this works quite well for some applications.

I am definitely not an expert here, just sharing some of my experiences with this… -Kenneth

Some great info here, thanks for taking the time.

That is very cool, and thanks for sharing all the details. The results are a lot more consistent than I’d expect.

If you haven’t already, you might want to post to the Warp9 ESS forum about tuning the delays for those divots. Andrew is very responsive and if there is a way to help with that he would know, and if there is something he can add to the ESS plugin to make it happen he would be the guy to ask as well.