Slab planing for a headboard

Did a little slab planing over the weekend: 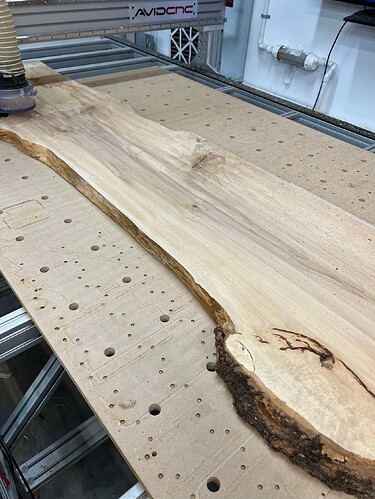 There’s an open air slab market near my house that runs about 6 times a year. I head over there and grab a few throughout the year. We got a new bed and decided that rather than buy a headboard that making one would be neat with a wood slab.

From there I cut it down to size with a circular saw. I pulled the bark off and wire wheeled it, rounded over the sharp edges with a Dremel and then coated it with a thick layer of epoxy.

Waiting for it to dry today and hopefully I’ll get it mounted up tonight. 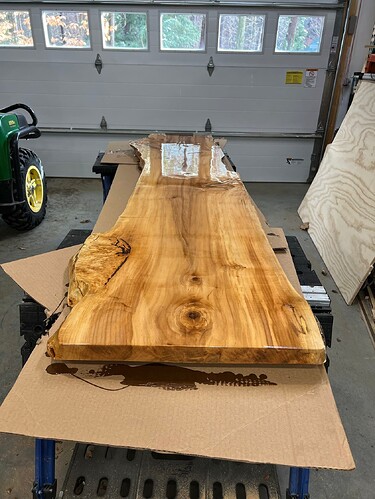 Did a little slab planing over the weekend:

Hey Eric, … What kind of wood is that?

It’s local maple as far as I know!

Thanks! I’m super happy with it. I’ve done a little work with epoxy, but nothing this big.

It’s so satisfying to be able to cover the whole thing in just a couple of coats. I did a bar top in my kitchen out of a similar slab and I used water based urethane (because I wanted a flatter finish) and that took about 15 coats. I love the way it looks but it was a lot of work.

great example of what the machine can do. Now you just need a sanding
head and you can eat your lunch while the machine does the work. I have
several Avid owners usinng the head now.

Funny… a few years ago I rigged something like that up for a weird project I had where I had to scuff up tons of sheets of plastic… It worked better than I thought it would.

For slabs I’ve found it’s much cheaper (and less effort) to have nice sharp blades in my surface bit!

For about 4 years now, I’ve been threatening to make a small spindle mounted box that’ll hold my random orbit sander, then use it on slabs I’ve just finished surfacing. It shouldn’t be too hard to make.