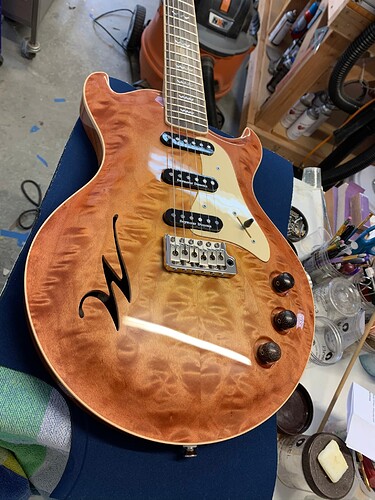 I tried my hand at this prior to CNC.
Useless I’m not that guy!

The Wheelz is original in design. Rhino modelled and almost entirely CNC machined.

This is incredible! Do you have any in progress pics?

I have a million such pics.
this is about the 15th run
(there are several models at this point)
I will attach a few pics here 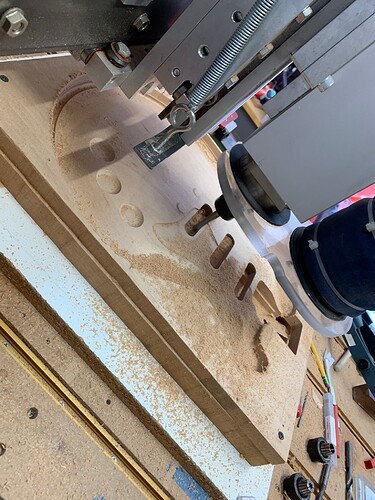 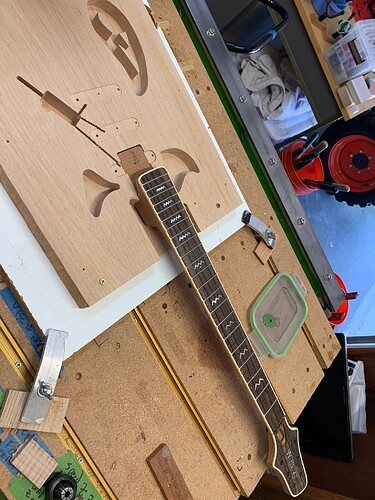 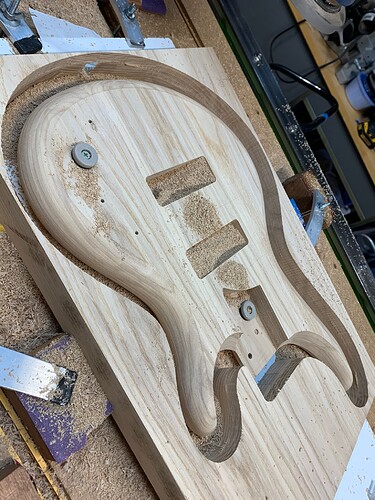 Looks great. Personally, I would prefer the toggle switch somewhere else for playing, but it sure is a looker. How does it play?

That’s legit awesome. So you modeled in Rhino and are you using RhinoCAM or something else?

thanks again.
It was a looonggg project with the goal of producing original guitars.
Had to:

I chose MADCAM and I really love it.
For CAM, it’s very inuitive and uses conventions within Rhino that make sense to me

thank you Ed.
I agree with you on the toggle.
This model I refer to as the “StratOWheelz”
(somewhat jokingly).
I added some features of a Strat, namely the pickup layout and the controls. That is pretty much exactly where the toggle switch sits on a Strat. Yet it never bothered me on a Strat. Kinda does here. But its minor.

These play as well as anything Ive played which is mostly Les Paul and Strat. (Recognizing that is subjective and I am biased). But in truth, it is EXACTLY what I was shooting for. I love it.

It is well balanced, nice weight. Fretboard is dimensionally pretty much a copy of my LP cuz I like that. I use only the best materials and hardware. Sapele back. Maple top. Ziricote fretboard with ABS binding ala Gibson (LP).
I use the CNC to form the ABS fret “nibs”. What a joy to NOT do that entirely by hand!

Well, ya got me going… 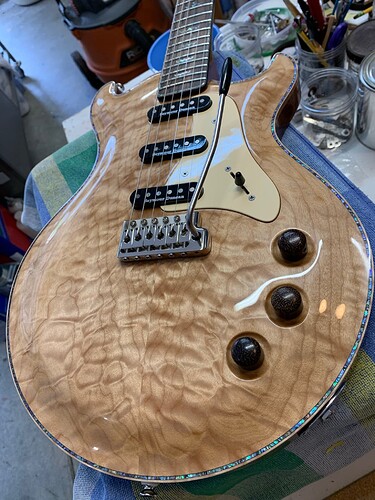 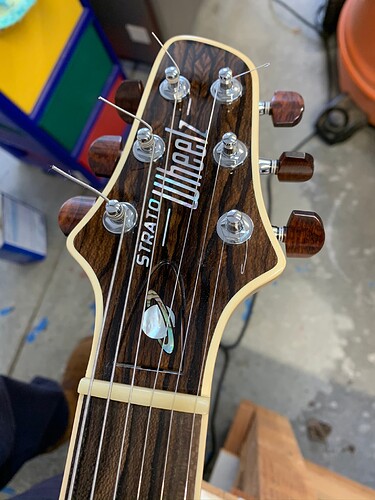 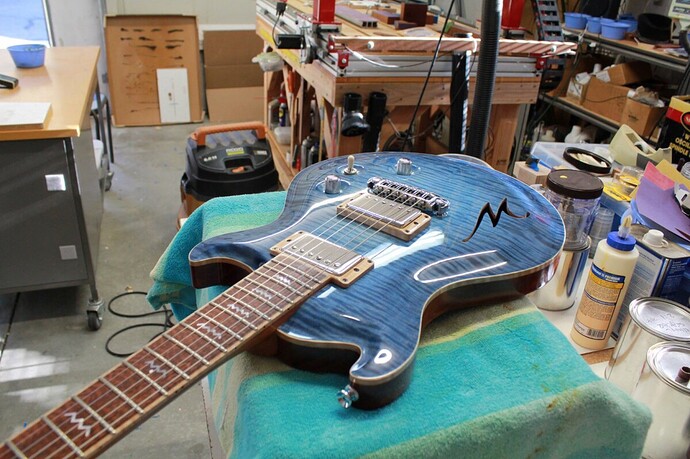 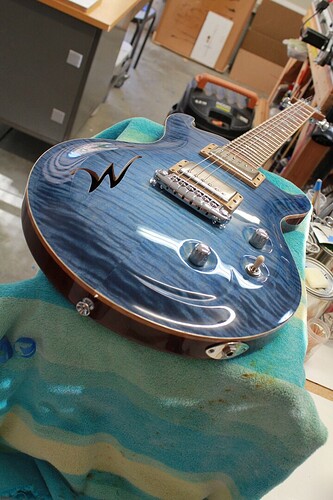 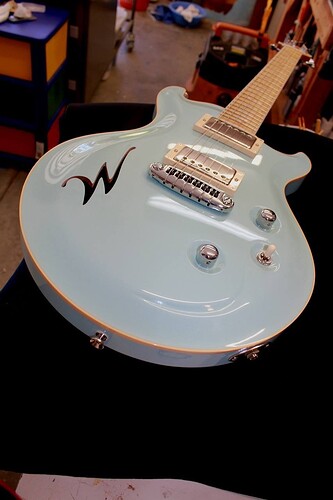 Gracious! That is OUT of this world. Congrats on this piece-of-a-lifetime!! Inspiring!

Awesome! Guitars How long have you been making them and how long does it take to make one? Just curious!

Thanks!
I guess I’ve been at it about 10 years or so.
Made some pretty aweful ones early on.
Serious learning curve there.

I believe it’s about 150 hours per, though Ive never really tracked it.

Awesome guitar building! I made guitars years ago on a homemade CNC machine, but now that I have the benchtop pro, I’m thinking of renewing my love of guitars. I’ve moved all around the world over the past 10 years but recently settled down, thus the recent Avid purchase, and renewed interest. Here’s a guitar I built (a lefty) in 2010 for a band out of Atlanta. I inlaid their band logo into the body. All CNC made, from a homemade cnc, including the 24 fret neck. Nothing close to your build, but you have inspired me to try building again! Thanks!

Great job on your build! Keep it up! 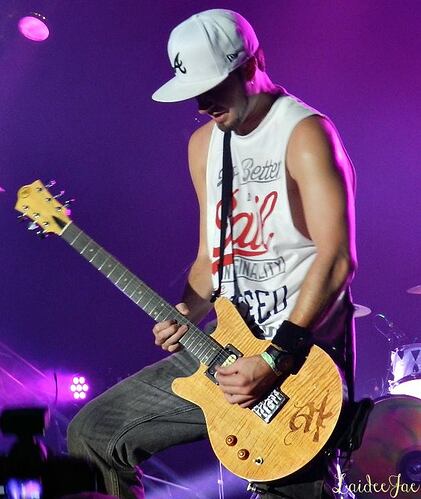 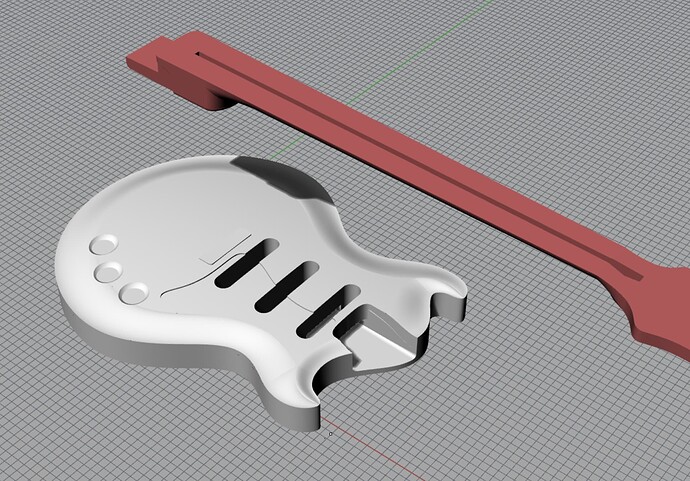 instruments are such great CNC projects. Limited only by the imagination.
Here is a mock up of my last model type. This is the kind of thing that would be REALLY hard to do w/o CNC and good modeling software. I spent MANY hours on the model with the goal of having this “shoe-horned” in neck tenon and putting the pickup adjust screws out of sight in the back (under covers) so that the pickups have nice clean edges and no extra cutouts for the adjust screws. The neck tenon arrangement allows for the undisturbed area between the 1st pickup and the fretboard and allows the pickguard to occupy that space. The contoured, inset pick-guard was a challenge to model and path.

Had to create mockup blocks for the tenon pockets and pickup cavities to make sure it all worked as predicted (it did with minor revisions). Made an animated neck tenon/pocket model so I could slide it in “virtually” to rule out interference.

Embarrassingly many hours of modeling involved but I really just love doing it - which is probably what any of us would say about CNC work in general.