Who's using a laser?

As the title says: Who here is running a laser of any kind on their Avid CNC?

Raise your hand if you are, and let us know what kind of laser you have, and what you’re doing with it.

I have the parts to assemble one but haven’t completed it yet. Parts: 80w generic CO2 tube (eBay), HV 80w power supply, water chiller and pump, sheet metal and front surfaced mirrors, mounts and culminating lenses + beam splitter to allow injection of a visible alignment laser to aid in positioning / setup. Currently the sheet metal for the initail design is cut. I need to spend some time getting it bent up, stitch welding, and installing some riv-nuts. There will likely be some tweaks as it goes along.

I find that I cut a lot of reasonably thick 1/2acrylic and also thinner (1/4, 1/8 & 1/16th in) acrylic. I have been doing this on the router, and the attractive piece is that with a laser the work holding is greatly simplified. Typically (not always) I am working on larger pieces that want to lift up out in the middle and I spend a lot of time writing G-Code for the router in pieces so that I can make partial cuts, add hold downs or throw a bar across and clamp at both ends, etc., or (even worse) trying to move clamps dynamically as the router head comes around.

I have seen the posts from jjneeb and for kicks and giggles I have considered looking into one of those lasers as well more as a fun project for some artwork pieces, but I’ve not purchased any parts for that yet. Figured I’d get the current one up and running first.

If you want to cut acrylic, then you are on the right path with the CO2. Diode lasers are visible light so they go right through most acrylic, except the very opaque stuff.

Are you planning on mounting the tube in back and running the beams down the axis like a standard CO2 system? Would love to see how that turns out.

Yes, planning on mounting the power supply & tube assemblies to the frame so that I am not adding that mass to the head or gantry.

One other piece I had considered for the metal working side of things was picking up a fiber laser for engravings / marking and using the CNC platform to provide a precision positioning of it. Run it on a 50x50mm area, step to the next one let it run and repeat. Here before Covid there were bunches of these companies on the market selling through eBay and now I see that a bunch of them have dried up / gone away. For now I have been doing plasma marking on Steel with Argon gas (instead of Air) and that works well for very low resolution marking. (Big letters, bend here type lines, etc) The fiber laser would let me etch much more detailed lettering / markings then cover the fiber laser head and pump up the plasma torch to cut the parts out. This is one of those (it would be fun to do) type projects, but for what I actually need the plasma marking is getting me by for now, so I don’t know if I’ll actually do it or not. It is kind of an expensive thing to go do just for the fun of it.

Interesting. What does the Argon marking look like, a thermal discoloration?

I’ll post some pictures of the plasma marking process in the plasma cutting section tomorrow. Depending on amperage, cut travel speed and material it cuts from 0.002~0.005in deep in stell, aluminum, copper, brass, stainless, etc. Pretty much anything you conductive that you could normally plasma cut. It uses the same electrode in the torch but a different nozzle and a different shield. Also you switch from a flow regulator (used for air) to a pressure regulator used compressed Argon. I’ve always got that around for welding anyway, so it was a no brainer for me. The AVID-CNC torch height controller makes it super consistent, and I’ve been pretty happy with it for the stuff I’ve needed it for. Hypertherm has an extra set of cut charts and a small section of their user’s manual about it. I just tried it and viola, it worked once I got the right pressure regulator and swapped in the consumables.

I have a stand alone laser (20w diode). I don’t want to tie up my AVID cnc with laser jobs. I frequently set the laser up for a lengthy job and run the CNC while the laser is running. More efficient for me this way.

I’m running an Endurance 10W diode on a CNCRP 24x98 custom sized table with Mach 3. I use LightBurn to create g-code but it needs to me manually modified to use M11/M10 commands.

Getting Mach 3 to run laser is a bit of a chore but it can be done.

I cut wood veneers for custom ski graphics. I also do some basic engraving of simple items.

Despite all the “it’s the wrong type of machine for a laser”… a friend needed a large laser job done, and was willing to pay for the laser head… so I’m in the laser gang now

Laser is a 450nm 10W optical LASER TREE Laser Engraver Module Head [1] run off a PWM generator on my Mesa 7i76e card (I’m linuxcnc based). Here’s me inspecting the mess of electronics, you can see the laser head just to the left of the S30C: 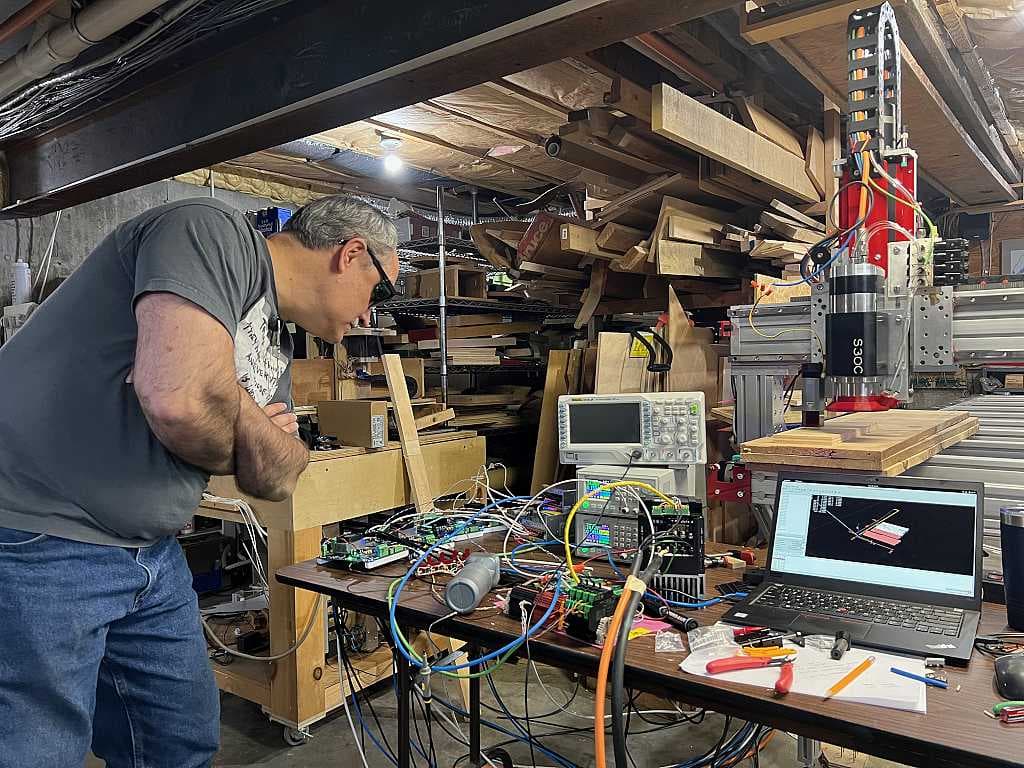 Note we did end up using a uni-directional scan, because the motion tuning is still bad and bi-directional gave us two not-quite-overlapping images. We tried doing a high speed “outline” etch and the machine nearly shook itself apart…

Software was LightBurn, which worked as-is with linuxcnc, with just a few lines of pre/post gcode in its config.

LinuxCNC is superior in its G61 and G64 implementation, absolutely NOT going to argue over that. I also wouldn’t say our machines are “the wrong type” but “less optimal.”

Linuxcnc has a bunch of advantages, but I was referring to the sheer mass of the machine. That much mass can’t move fast enough and accurate enough to match the lightweight dedicated laser setups. Fortunately for us, we figured out ways around those problems to get a working solution. So yeah, “way less ideal”