It’s always good to have some gifts handy, and holiday season is coming up fast. What gift projects have you made on your CNC? I’d be interested hearing about both batch runs and one-off pieces.

(@Eric, if someone wanted to share model files, what would be the best way to do that?)

You can attach model files right to posts if you want.

@Stephen this post of yours is a great idea.

Here’s a nice nightlight that I made. Copied/slightly improved the idea from a gift we received. I said to myself: Self, you could make that so easy. Bragged that thought aloud to my wife, whereupon she’s since requested 9 made for various gifts. Anything to help her agree the CNC purchase was wise!!! 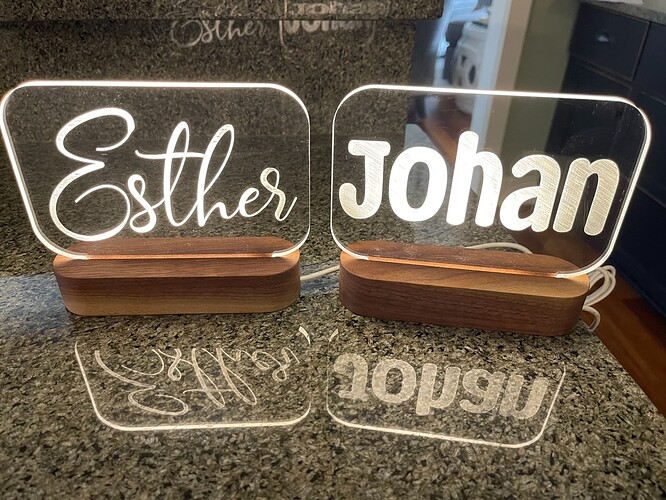 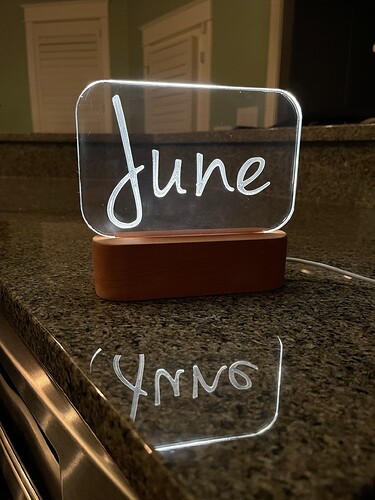 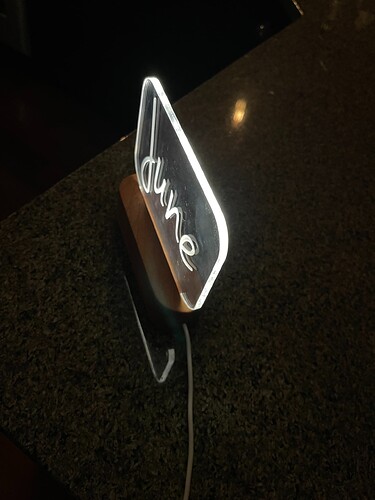 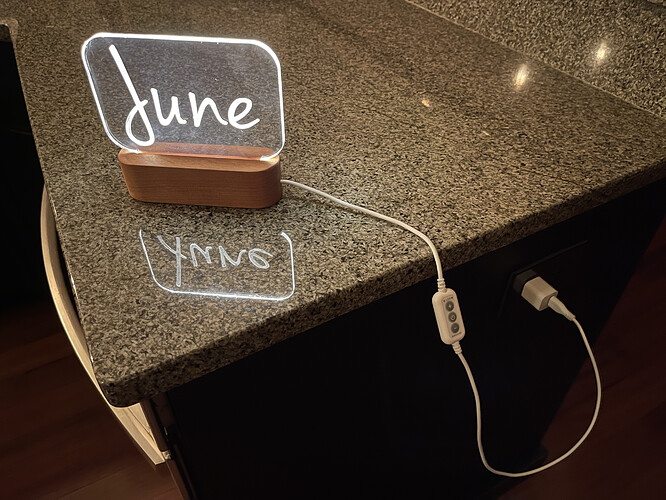 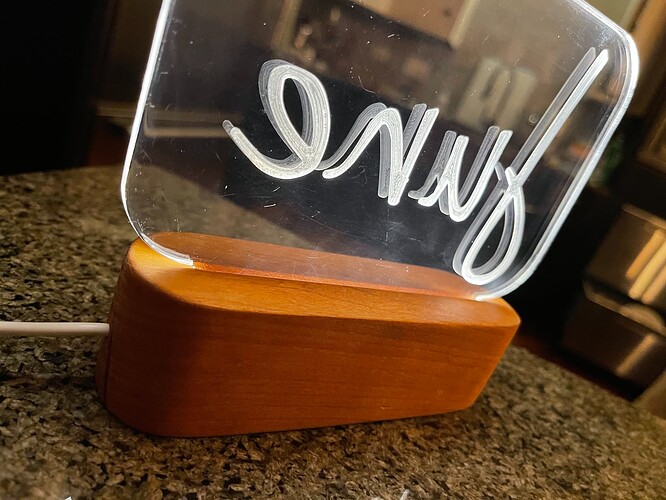 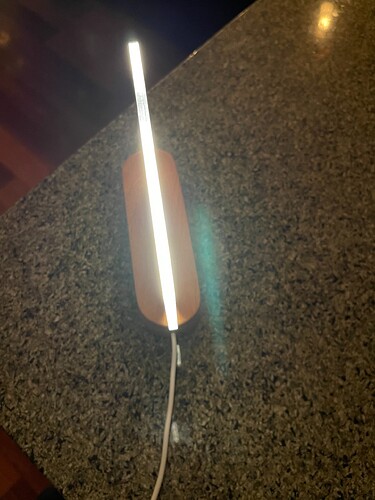 It’s built around an LED strip light, I purchased this one. It’s about $12 so that’s one “expensive” part. But it’s like 9 feet long and I only needed 5 inches! Using the rest on the other night lights, using these spare LED dimmer USB switches, which are now sold out thanks to me, but there’s others available there, then used this soldering kit to fabricate a bunch of strips out of the 1 original long piece. This soldering tutorial really helped learn me about that but didn’t stop me burning myself.

Plexiglass is a b…bit difficult in that it likes to scratch just by looking at it. I should have left plastic sheeting on but was afraid it would get caught up while milling so I peeled it off. But my milling and handling scuffed it up pretty fierce. You can see the plastic strands gathered around the endmill: 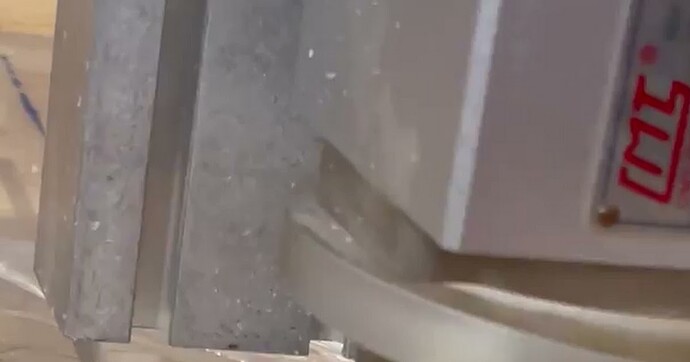 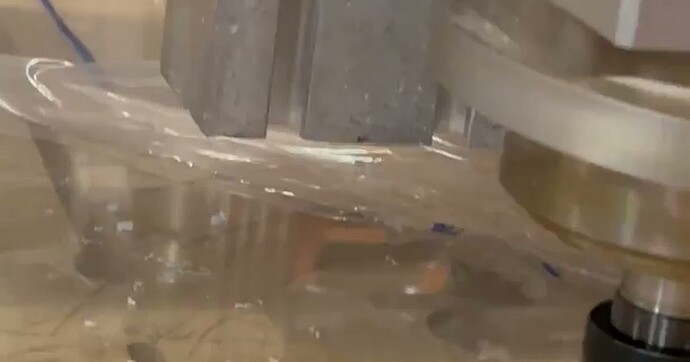 So anyway I had to sand portions from 220 up to 3000 wet, That left it still foggy. So I bought Meguiar’s #10 and #17 and those did absolutely NOTHING but make my project greasy. Returned those fast. Then I bought a buffer wheel and used the white compound in this kit, to un-ruin it before gifting, which worked out great finally!

About the plexiglass, you can get various thicknesses, but I really like the thick stuff as it presents a ton better, especially if you take a few mins to sand down and buff the edges…they really gleam then.

Of course mill in whatever kid’s name/message/graphic you want (my wife wants “Joy to the World” & other seasonal plexiglass inserts now). It’s nice to reverse your graphic and mill in the reverse side so it feels smooth on the front. Also the inch or so that pokes into the wood, the face of that area is hidden, so it’s a great place to mill a custom message for the receiver, so they know you didn’t just buy this on Etsy last minute.

I’ll post the aspire drawings later/as requested, when I get back to the shop. 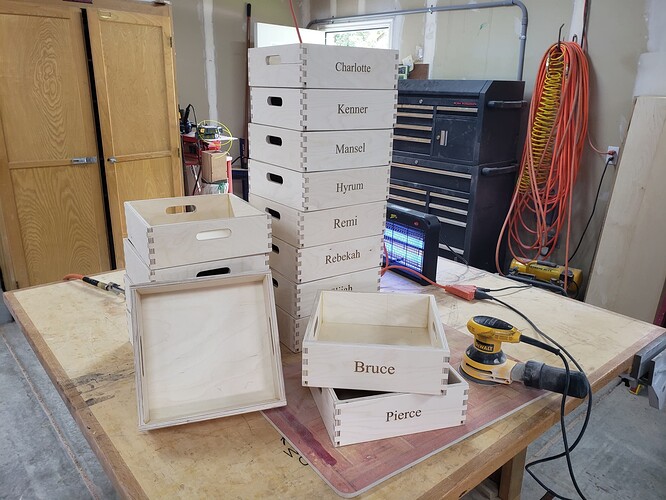 20211009_1355111920×1440 247 KB
Last year I made all the grandkids a personalized creates that I and my wife filled with craft items. Each create was engraved with their names. For the younger kids we filled the create with blocks. For the little bit older kids some crayons, paper and pipe cleaners. While the older kids got markers, clay, carving knifes and soap to carve. It was a great hit and everyone enjoyed Christmas.
Now we set a high expectation and we are looking for another great idea for this year. Any suggestions…
2 Likes
Stephen January 6, 2023, 5:53pm #6

Finally finished one myself. Here is an hourglass (frame) I made for a family member for Secret Santa this year. 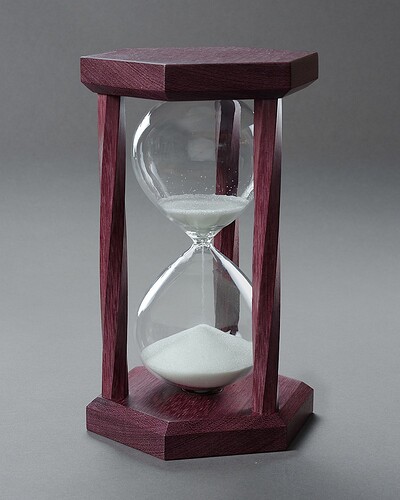